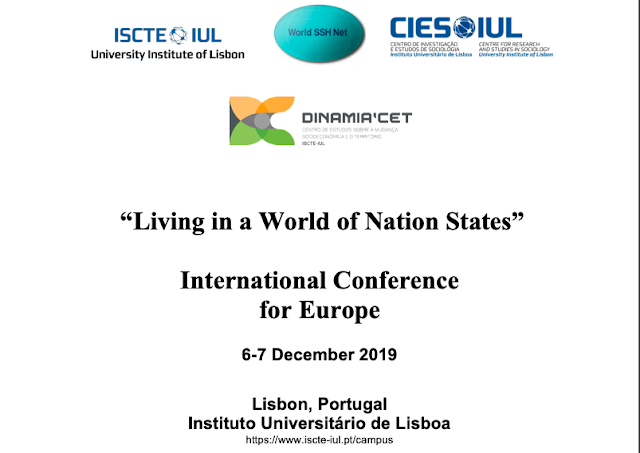 4. Nation states in a world of states and a global market economy
The above topics will be discussed on a series of conferences across the world. The second conference will be held in Lisbon on the 6/17 December 2019.
The conferences in this new conference series of the WorldSSHNet will last two days. On the first day only a limited amount of papers, which make substantial theoretical contributions to reflect on the above topics, will be presented with decent time for debates.
On the second day, papers presenting studies, articles and alike about aspects of the topics will be presented with a shorter time budget.
Papers/abstracts may preferably present theoretical contributions about the before mentioned topics or critical reflections about existing theories, possibly combine both – or suggest other topics missing on the above certainly not completed list of topics. All papers, including those, which might not be presented due to time constraints on the conferences will be published in the newly established WorldSSHNet journal “Beyond the Social Sciences”.
The deadline for the submission of abstracts is the 30 September 2019.
Please send them to:
[email protected]
[email protected]
For More information in Draft Rationale and Call for Paper, Click Here.
You may also like...  International Conference on E-commerce by Center for WTO Studies at IIFT, Delhi on 7-8 March, [Submit by 15 Jan]

12th International Conference On “Digitalization As Vehicle For Innovation, Organizational Growth And Effectiveness 19-21 Dec 2020 at Prestige Gwalior [Submit by 20 September]